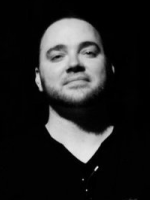 Shadow
Shadow is the main songwriter and founder of Spitting Angels. 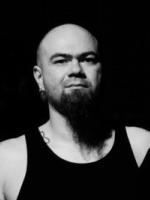 Ian
Other than Shadow, Ian has been in Spitting Angels the longest.

Spitting Angels combine elements of goth, punk, metal and rock & roll to create a unique sound. Drawing from their diversity of influences the music is at once unique and catchy, expressing the duality of their Gemini frontman and main songwriter, Shadow. While the songs often span genres and defy categorization, Spitting Angels have already earned a reputation as a powerfully intense and emotionally charged live band. If their music does not resonate with something deep inside your soul, you may not be human...

The Saga of Spitting Angels

Spitting Angels has quickly earned a reputation as an intense, dynamic live band.  They deliver their live performances with unbridled emotion, easily shifting gears from wailing despair to seething ferocity.

Led by Gemini front-man Shadow, their songs range from mellow refrains of unrequited love to blistering, angst filled anthems about the hardships of life. With their sets often peppered with tongue-in-cheek banter with the audience and each other (bringing levity to otherwise pathos-ridden performances), it's clear that Spitting Angels has a profound love for music of all types, as they draw their influences from several styles, forming a unique sound that defies categorization and is hard to pin down to any one genre. They've often been typecast as goth, punk or metal but that those labels fail to incorporate their just as vital softer side, drawing from psychedelic, ambient and acoustic influences or even their often overlooked pop sensibilities in writing strong hooks and catchy, sing-along melodies. It's best to just stick to a more generic label of "rock" and let each song speak for itself.   It's this broad amalgam of influences that often makes it a challenge for Spitting Angels to find similar bands to perform with but they are just as comfortable performing alongside pop rock bands as they are hard rock or even metal. Bassist, Ian, has coined the term "post-apocalyptic gospel" to describe the band's sound while Shadow tends to think the sound is more along the lines of "subversive pop".

Hoo boy, Shadow here. Writing bios like this make me feel kind of icky and we're anything but conventional so I wanted to deviate from the third person and tell you more about us from my own point of view. I like conversational tones a lot better, don't you?  All the corporate overlords can take the bits above for their sales copy or whatever and you and me can move on.  At this point this pretty much ceases to be a bio and becomes a narrative.  Anyhow, we have a master plan for world domination and we are here to subvert the mainstream. Without subjecting myself to any false modesty, I am the architect of a grand design and if the fates will have it, we will be lucky to realize that vision someday.  I believe I have finally found, in my current bandmates, kindred spirits that will help me realize that vision.  You should be along for this ride.  You should be there so that when we reach a certain level of success, you can call us "sellouts".  It's inevitable that will happen.  The one thing I miss in the music industry right now is that almost all the popular bands lack personality.  We want you to get to know us, we want a close relationship with our fans and to that end we are fiercely independent and looking for business relationships that will not rob us of that.  My personal needs are simple, I want to do things that I think are awesome, I want to work with people that I think are awesome and I want to inspire and encourage the people around me to do awesome things.  I would also like a giant robot.  I think my bandmates will agree with me on these points and if not, the giant robot will keep them in line.

all content of this site © 2001-2022 spitting angels.
all coding and design done by shadow except for elements of: messageboard, gallery.
Email Us | Our Myspace | Like us on Facebook.
spitting angels are a rock band from austin, tx, usa.